How Much Does it Cost to Charge an Electric Car?

How Much Does it Cost to Charge an Electric Car?

Electric vehicles are rapidly becoming more popular. Over the next ten years, the UK could be home to more than a million of them. In 2030, they will become the only cars in the country you can buy brand-new. But, while they’re good for the environment, are they good for your wallet? Well, we’re going to get your motor running to find out.

One of the biggest expenses for motorists is fuel. The price of fuel varies all the time, with a current average of over £60 for a full tank. Compared to buying petrol, charging the battery in an electric vehicle (EV) anywhere between £8-£12, giving a journey range of about 200 miles. These are not exact figures, however: the cost of a full charge and the mileage it provides does depend on the make and model of car. But even if you pay £12 once a week to fully charge your car, that’s instantly significantly less than you might have paid for a full tank of petrol.

Most EV owners will charge their vehicle at home. This can be done just by plugging the car into a standard domestic plug socket. But, if you don’t have a garage with a plug socket, this could prove awkward. On top of that, the power output of a standard plug socket wouldn’t make using it feasible for long-term EV charging. You would therefore be better off installing a home charge point. 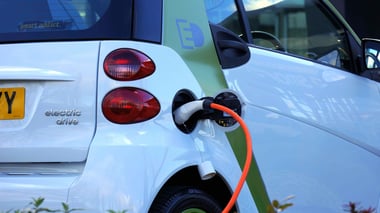 Upfront, this could cost you around £450 or more. Although there’s a government grant towards the cost of installation, it goes to a maximum of £350. Installing a home charge point is therefore a lot to pay in one go. But it could pay for itself within just a few months: you can travel 200 miles for £8-12 in an electric vehicle, whereas that same trip in a petrol or diesel car might cost upwards of £30. So, if you drive 200 miles in a week, paying £8 per full charge, and your home charge point is £450 after the grant, it will start to pay for itself after only 21 weeks. That’s less than six months!

You might be wondering if this would spark a steep rise in your electricity bills. Fortunately, the answer is no. They will go up because you’re using more electricity, but some energy providers are now offering tariffs specifically designed for electric vehicle owners. Not all providers offer such tariffs, so it’s worth shopping around to find the right one for you.

But what if you’re out and about? Well, if you’re on a motorway and need to stop at a service station for a top-up, charging for thirty minutes costs an average of £6.50. You might pay more than that for the food in the services! Not only that, but that thirty-minute charge would give you an extra ninety miles of battery life.

Depending on the price of petrol, and the fuel efficiency of a non-electric vehicle, you could be paying twice that or more in petrol costs. Paying £6.50 or more for a one-off charge might seem odd when you’d be paying around that for a full charge overnight.

Fortunately, there are subscription services that allow you to pay a small monthly fee to access their network of public chargers across the UK. You may also be able to access on-street chargers if you cannot get one installed on your property. Handily, more and more chargers are being made available all the time. Your workplace might even have some installed – and if they don’t have any now, they may well do within the next decade.

Isn’t Buying an EV more expensive than a Petrol car?

Beyond fuel, the biggest cost of a car is buying it. One common fear among motorists is that an electric vehicle will be more expensive than a petrol or diesel car. Upfront, this might be true. At the cheaper end, a brand-new EV could cost between £20-30,000. But, with Personal Contract Purchase (PCP) or car subscriptions in place, the overall monthly cost of leasing an electric vehicle doesn’t differ much from leasing a petrol car.

EV journey range and battery life are also always improving. So, by the time your lease is up, you may be able to switch to a newer vehicle with a longer range and better battery life than the one you just had. You could even get a Wagonex subscription for an electric vehicle, paying less overall than you would on PCP.

The government will even help you buy an electric vehicle. Not only is there a grant for 20% of the purchase price, up to a maximum of £2500, but you will also enjoy the feeling of not having to pay road tax. And, if you live in London, you won’t pay the Congestion Charge either.

Is Insurance Cheaper with an Electric Car?

Electric cars are even cheaper to insure than their non-electric counterparts. Owners of a Nissan Leaf, for example, might enjoy premiums of up to £150 less than owners of a Ford Fiesta. This is despite the Ford Fiesta being a smaller vehicle and cheaper to buy than a Nissan Leaf. 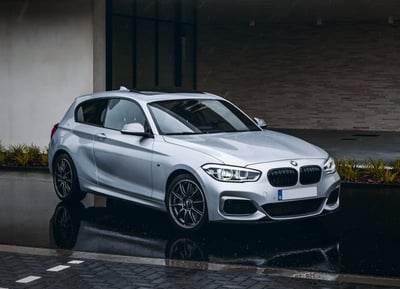 The Nissan Leaf and VW Golf both are very similar in price if you wanted to lease, subscribe or finance them, and the savings in fuel bills would mean that you save more on electricity each month than the difference is price.

That’s an instant saving of £45 a month! Bonkers! 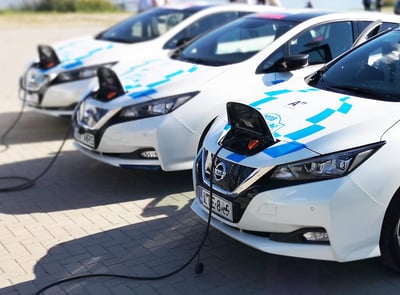 And that’s without adding up the savings from road tax which is at least £150 on a petrol car.  If you're a local Londoner or a regular commuter you’ll be laughing at the amount of money you get to keep in the bank! The ULEZ charges you £25 every time you enter the central areas of London. So the savings could be even better than you first thought!

So, ultimately, an electric vehicle is much cheaper than a petrol or diesel vehicle. The cost of purchasing one and installing a charge point at your home might initially be high, but buying, leasing, or subscribing to Wagonex for an electric vehicle all work out to less than or equivalent to a petrol car in the long run. Installing a charge point pays for itself within six months.

With no road tax, the probability of lower insurance premiums and lower running costs, electric vehicles are saving you money and saving the environment.

Looking for an easier way to access an electric car? Go to our car subscription marketplace to find yourself an EV without any pricey upfront fees.

Want to Learn More? Check out the blog below this!