Named for a roguish scientist with ideas ahead of his time, Tesla is a car company that has positioned itself at the forefront of car manufacturing. Making electric cars into luxury statements, Tesla has gained a devoted following among motorheads.

But do its cars live up to the hype? We compared the Model 3 and the Model Y to find out.

So, is there a difference between the Model Y and Model 3?

In comparing cars from two different manufacturers, you would expect there to be significant differences. This isn’t quite the case with the Model 3 and the Model Y.

They’re both quite similar vehicles, because the newer Model Y is based off the Model 3 and incorporates many of its features, but they aren’t identical.

For one thing, the Model Y is a bigger car than the Model 3. It’s closer to an SUV than a hatchback, and as a result is able to offer much more legroom and storage space.

This goes both for the boot and the interior. Tall passengers will have no complaints in the back seat nor the front, and if you’re really pushed for space when going on holiday or packing up to move house, there’s a sneaky space under the bonnet for extra bits.

Both models also offer back seats that fold down if you’re in need of more rear space. Roomier as the Model Y might be, the Model 3 is no claustrophobic cab-ride: there’s no central hump in the floor to trip up back-seat passengers, and tall passengers can comfortably ride behind a driver of six foot or more. Its panoramic glass roof and tall windows also make it feel much less cramped than some of its rivals from other brands.

So, whether you’re taking the family on holiday or just going on a road trip with your mates, both models offer plenty of space inside. But how do they compare on comfort and handling?

Is the Model 3 more comfortable to drive than the Model Y?

As noted, the space for passengers is great in both models. But neither offers much in the way of ride comfort. The bigger wheels on the Model Y mean that drivers and passengers can easily feel potholes and ridges, and even on roads that might look smooth to the naked eye can cause an uncomfortable journey. 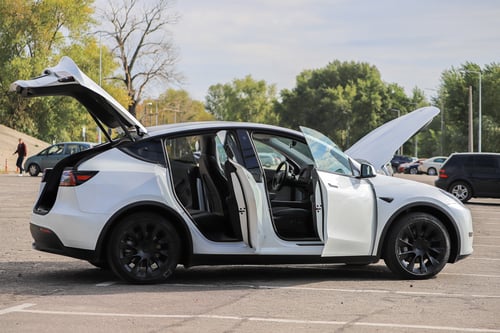 Being bigger than the Model 3, the Model Y is also not as easy to handle for drivers. The Model 3, meanwhile, is very quiet on the kind of roads you might see in a town or a city, though on a motorway or dual carriageway it can be noisier than you might enjoy. Despite this, it is, ultimately, a lot more comfortable than its younger brother.

Comparing the range of the Model 3 and Model Y

Fortunately for Tesla drivers, the network of Superchargers across the UK is only growing. This means that even though both the Model 3 and Model Y can achieve distances between 230 and 280 miles between charges depending on the version you choose – though it must be said that you shouldn’t need to push it that far!

Both cars are also quick off the mark, with the Model 3’s entry-level version getting from 0-60 in just 5 seconds, while the top-of-the-range version of the Model Y can do it in 3.5 seconds.

So what's the verdict on the Tesla debate? Is there a clear winner?

As much as the Model Y may be an improved version of the Model 3 in many ways, the Model Y might not be worth the extra price tag.

The Model 3 can do everything the Model Y does, only with a couple inches more space in the back and boot. And how many people are really going for the Model Y for an SUV to carry the kids to school? Not much because it isn't as practical as your typical family commuter.

So, in conclusion the Model 3 is probably the better option for the majority of drivers. Unless you're sold on a  Tesla, but still need to carry either people or cargo, the Model 3 would be your best option.

Have you tried them out on a monthly subscription?

You won't need to pay a lump sum upfront or agree to a long term commitment. Subscribe with a small refundable deposit, and choose a term from one to 36 months.

Find yourself a deal on a Tesla Car Subscription.